Hello, dear users of the uwow.biz project. The world of warcraft is unbelievably inimitable, unique, varied and fantastic. From update to update we observe how this wonderful world changes and which innovations and changes appears. Fortunately, not only expansion sets are different but also servers themselves. The brightest example of the unusual realm is the realm Fatality which is a part of our Wrath of the Lich King servers «family». But it is a quite formal relation since this realm is full of unusual items and events which are not typical of the LK realms. For example, Siege of Orgrimmar, multimillion players’ HP and many other things. Recently, a global update has been introduced in this realm. Since I liked this realm which seemed me really interesting I decided to speak to Desed, the curator of this world. Upon ending this conversation, I was surprised by the realm diversity and got a lot of positive emotions. And I offer you to acquaint yourselves with the interview.


{VictimsNiNo}: Hello, Sergey. We know you as the curator of the truly unique realm, namely, Fatality. Please, tell our readers what does this realm represent itself?
{Desed}: Hello, our realm is for those who get bored by standards and want something new, quick and unusual for the Wrath of the Lich King version. The last year we were adding some new models of the items, bosses and others. It will take a long time to enumerate all the innovations, since once per 6-8 months a global update is conducted and one of them is coming soon.

{V}: Even official servers would envy such rapid updates. And what does the coming global update represent itself?
{D}: It is subdivided into two stages. The main part has done already and the most important update which is still in process is the system of «bot-players». I will tell you about it a few weeks later in details, but now I can say that 300x300 pvp will be real soon at any time.

{V}: 300x300? Fantastic! But, perhaps, there will be a lot of lags because of such amount of players? Since many players have lags even at Alterac Valley where only 40x40 battles.
{D}: It’s all clear, but we won’t place players into a 100x100 zone. Actions will be held in a quite huge location which has the size of Orgrimmar.

{V}: Sounds interesting and unusual. I would like to see that.
You said that update was subdivided into two stages and the main stage had been done already. Will you tell us what the main and global parts of the updates are?
{D}: I went to army in December and Fatality was working without updates. I returned in June. For the beginning, I added some new content to the 3.3.5a version: Siege of Orgrimmar, Timeless Isle, Darkmoon Island. In august it became clear that we should get the server into shape since players couldn’t understand what they should do here. Leveling from the 85th lvl has been introduced; all the vendors have been removed and have been united into 2 npcs which can be summoned at any place of the world by clicking an item. We have updated the core, fixed everything and introduced the new login screen. In other words, our work was aimed to the maximum comfort. We have introduced a unique system of the items upgrade. You may improve them for special currency

{V}: Siege of Orgrimmar in Lich King? Is it possible?
{D}: Everything is possible, even Draenor and Legion, but it’s very difficult. We have plans for 2016 to add Pandaria and Cataclysm.

{V}: Then tell us please how it is possible and what the main difficulties are?
{D}: The main difficulties are: take into account all the nuances since the client doesn’t forgive mistakes and crushes may appear. Make the client work properly with the server part is also not a very easy task. Actually, there are a lot of technical problems.
Well, now I tell you how it is possible: Blizzard doesn’t really forbid editing the client, thus you may easily take files of the other game version and convert them into required one. But there are a lot of niceties. However, I should notice that it’s rather interesting and players like new models of mounts.

{V}: As I understood, you are responsible for the main technical part. Tell us, is it difficult and do you like to be «Blizzard developer», since you create a lot of things from the beginning.
{D}: I don’t really know. It will be difficult for many people, but when you have been practicing in this sphere for 6 years already, everything becomes quite easy. But the more experience you have the more interest you gain. The technical part becomes more difficult from year to year. In some situations you may even think «oh, hell, why do I know that? ». The most difficult part is to suit every player. It is impossible to suit everyone but we should strain after it.

{V}: How did you get such an idea? Why have you decided to create such unusual realm?
{D}: The realm story has begun in 2009. It had been developing apart from the uwow project till 2013. I didn’t have some special idea since earlier «non-Blizz-like» servers were rather popular and I liked to do something special. This is how it started…

{V}: What a huge and long story your realm has…
Finally, tell us about the plans for the Fatality except for Cataclysm, Pandaria and «bot-players»? What should the players be waiting for?
{D}: Mass events, such as, 1000 gnomes attack Orgrimmar and kill everything they meet; warsong Gulch 40x40 which is available any time; real awards for achievements; some more new mounts such as Nissan Skyline, Bentley Continental. Now we have only Lamborghini: 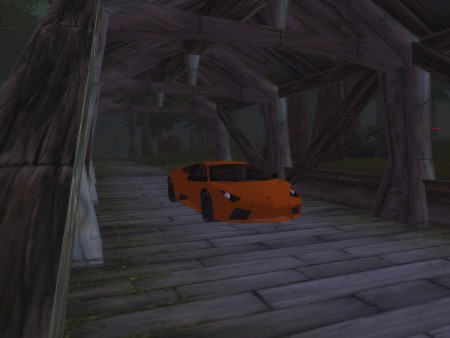 Oh, yes. Perhaps, the players will be gladdened with the new raid Hellfire Citadel from the patch 6.2 for the New Year!

{V}: That was unexpected! I can’t stop to be surprised by your realm and its «tasty» things.
{D}: Yes, «tasty» things! When 20 people of your team ride Lamborghini that’s no more bg, but rather auto-party. Or when your team loses one of the bots may type in the chat «stupid noobs» and leave the party. A bot may tell you that you are «not ok». You may fly at the old Azeroth and also we have some hidden and new items for transmogrification. We will add all the items of Cata, Pandaria and even some items of Draenor. We will actively work in the direction of the «tasty» things since it’s just funny.

{V} Thank you a lot for this interesting conversation and I wish your realm prosperity!

If you want to explore this world at your own Lamborghini, challenge the bot-players or prove your leadership in the 300x300 battles, then become a part of the Fatality realm.