Hello, dear readers. During the last days before the New Year, full of bustling around and waiting for the holiday to come, we continue to talk about class add-ons for World of Warcraft. In this article we will focus on rogue modifications.

Bitten's SpellFlash: Rogue
This modification is a SpellFlash module. It’s developed for all Rogue specializations. It highlights your abilities, which you should use at a certain moment. It helps you to maximize your DPS and increases your survivability.

NugComboBar
NugComboBar helps you to track your combo points on the current target. You can move the frame wherever you want, which makes your gameplay more convenient.

Announce Interrupts
By means of this add-on every Rogue will be able to track whether someone in his group or raid interrupted this or that cast. It will also show what cast was prevented and which ability was used to stop it.

RoguePowerBars
This modification show timers of recharging abilities as well as the duration of buffs and debuffs. RoguePowerBars can be used by all classes pretty much, but only Rogues can use it to its full potential. 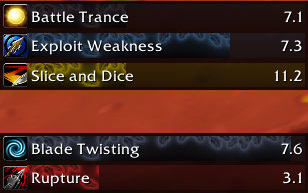 SliceAdmiral
This add-on is designed to show you the information about your damage done. Thanks to its convenient frames, which show the entire combat statistics, players will always be able to correct their rotation in order to get high DPS. 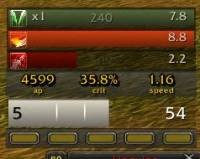 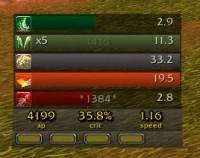 Combo Points Redux
Combo Points Redux is a numeric and graphical display for your combo points and poisons. You can drag the add-on’s bar wherever you want. You can also customize its look by changing the shape and color.

SliceCommander
It combines rogue’s combo points, poisons, energy and buffs on one bar. When installed, even a new player will be able to renew this or that ability.

Mutilate
This modification is developed for “Multilate” Rogue specialization. It tracks the current state of the game, buffs on you, debuffs on your target, energy and combo points. Note that this add-on works for one target only. In other words, you won’t be able to track several targets at once.

Assassin
Perhaps, it’s one of the most necessary add-ons for PvE aspect of the game. It scans your talents and character’s gear, and judging by that it prompts you how to maximize your DPS properly. 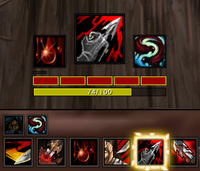 NugEnergy
It’s a simple add-on to use, which helps to track your energy. You can drag the energy bar in any convenient spot on the screen. This add-on is easy to handle. 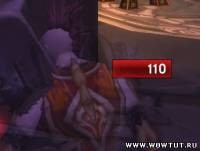 SimpleMD
It’s a must-have for PvE aspect of the game, because it notifies you about redirecting spells being used by Hunters or other Rogues. It also tracks redirecting abilities of your group or raid members.

Well, perhaps, that’s it for our article about class add-ons: Rogue. We hope that we have helped you to find the add-on, which would make your gameplay more comfortable and interesting.