Hello all! Today we continue to review addons that are somehow connected with the gaining of the World of Warcraft achievements. In the previous article we have reviewed the most popular addons. Now, we are going to speak about less popular, but no less useful modifications for playing WoW at the uwow.biz project in particular and at all other projects in general.

GetRare
This addon has been developed to track rare mobs at Timeless Isle. It tracks the RareAnouncer, RareCoordinator, RareShare and GetRare addons of the other users and shows the information about where, when and by whom one or another rare mob was killed. Also, you may add to the black list one or another NPC, customize individual notifications and many other things. As you understand, if the rare mob was killed by the player who doesn’t have any of the mentioned above addons, you won’t get any information about it. 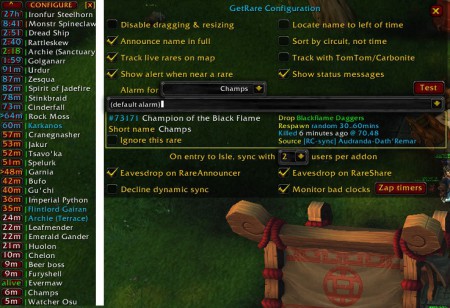 Dark Soil
Gaining reputation with the Tillers? Then this is the addon for you. Dark Soil helps in finding the places where the http://www.wowhead.com/object=210565/dark-soil is situated. Addon adds these places to TomTom addon and after that an arrow appears at the screen showing the direction for searching of the dark soil. 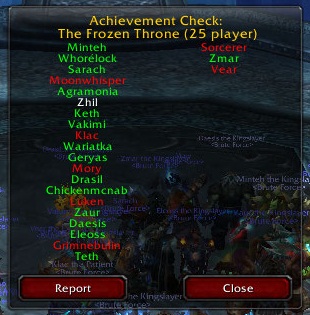 Faction Addict
Faction Addict is an autonomous addon, which gives additional information about your characters' factions and the level of reputation with them. It mostly will be useful for those who like to gain reputation or earn as many achievements connected with the reputation of neutral factions as possible. The addon shows the reputation and helps to track its gaining during the gameplay. 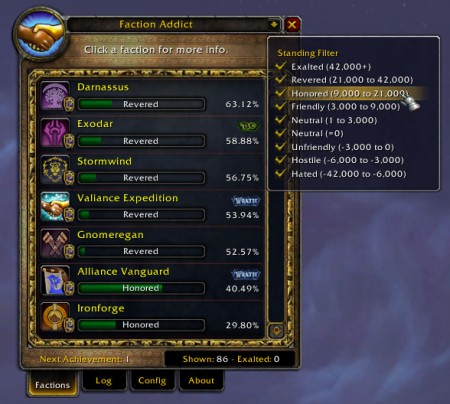 Urban Achiever
Standard achievement window doesn’t have a lot of functions, but Installation of this addon will essentially increase its functionality. Urban Achiever allows tracking various achievements according to different criteria and features. This addon helps to select appropriate achievements and shows statistics and criteria for its completing. Of course, this addon is quite unusual and not everyone will like it. However, it is able to render a great assistant to those who are collecting achievements. 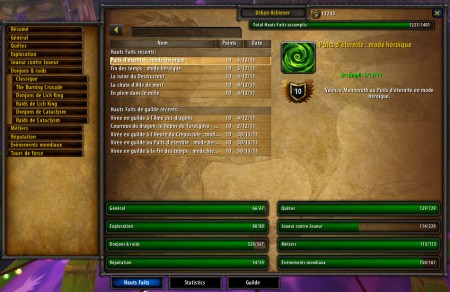 Achievment Screenshotter
It is a small but very useful addon. It will allow you to capture the most important moments in the life of your character. The addon takes a screenshot after the completing of achievement and also after the end of battle on the battleground, after defeating the boss, level up, changing of the reputation level and many other things. You may customize the addon on your own taste so, that it will capture only the moments that are chosen by you. 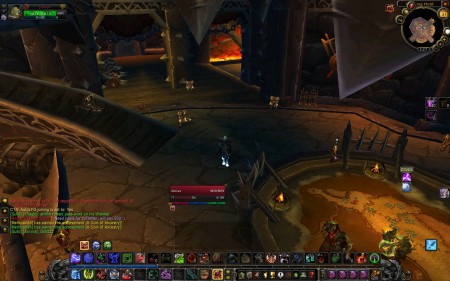 GuildGreet Extended
This addon tracks your guild characters. It will congratulate on achievement automatically. Also it will remind that you should congrate your guildie on the new level. Moreover, addon can congratulate new members with entering the guild.

Multishot (Screenshot)
This addon is very useful since it keeps so to say a diary of your character. It takes screenshots of the different game events. In addition, it may take screenshots of level-ups, guild level-ups, reputation change, various trade window transactions, any rare/rare-elite mob kills and boss kilshots.

Accomplishment
Accomplishment is a one more addon that will help you to congratulate your guild, group or raid mates on earning an achievement. The characteristic feature of this addon is creating of the special window containing the nicknames of the players who earned an achievement. So, the left click stands for congratulation and the right click stands for removing of the nickname from the list. If you close the window you will lose all the nicknames. Addon window changes its size automatically if the new players' nicknames needed in congratulation appear. You may move the window as you wish and it means that it won't cover the necessary places of the screen. 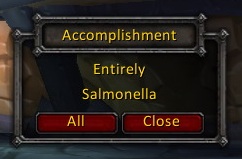 Well, this is the final point of our narration about the addons which are useful in gaining of achievements and in congratulation of others’ achievements. If you have read these articles and you are interested in the earning of achievements, than you should have found some useful addons for you.