Dear users, I welcome you on uwow.biz. The first of April is the traditional day of pranks. We celebrate it in Warcraft world too. Not by itself, but with the help of Blizzard company of course. Not to be worse, I am going to tell you about the April Fool’s day pranks of this company, I mean green-skinned Joda Master.

So far in 2001 the first prank happened.Warcraft III Blizzard declared in 1 April post that they Pandarens would introduce. The crowds of players lifted a voice against, “the fluffy” were not suitable for WoW's world, but it was only a joke. However there is no smoke without fire. Moreover, the company is too serious. In 2011 they repeated the joke, but there was anybody to believe in it. Blizzard was irritated with such an attitude and they introduced the fluffy bears in World of Warcraft in Pandoria, how we know it now. Mischief, as people say, managed.

In 2004 they decided to release a similiar prank, but this time with Goblin Mechanic. People were disappointed when they realized it was only the jole and they again lifted the voice against. Blizzard felt sorry and developers introduced these Goblins in Cataclysm, what pleased players a lot. But they didn’t risk to introduce the second prank because it was impossible. The idea of it was a new race to create, Two-Head Ogres which could be used by two players, one head for each of them. If one had left the game, another would have had no opportunity to play. It would be funny to look at this idea, but they had not realized it.

In twenty zero five all users of our forum eu.battle.net turned into Murlocs and discoursed in a required language instead of their own. It was again Blizzard's killing joke, it decided to rest from crying on the forum, so it did in that way. At the same time garnison announcement turned up, that everybody could erect a keep, build fortifications and set up towers. PvPswere were upset that it was only the joke, but there was some truth, which we saw in Draenor. The opening of restaurants was announced on their site at the same day. Those were such restaurants, where all dishes were named after world and heroes of Warcraft.

In 2007 many jokes were made. The announcement of a game Warcraft: Heroes of the Azeroth was the first. It should consist of heroes from legendary stories. Also it was dedicated to those, who hadn’t got any knowledge about foundation of strategy of that game. The second joke pleased the players the most, as the big news was about planning the event in the game, the news, with which even an opening of the Gates of Ahn'Qiraj couldn’t be compared.They even scheme add, which gave an access to Black Temple and allowed all Illidan’s secrets to reveal as a result. One more piece of news was an introducing of a Tinfoil hat. 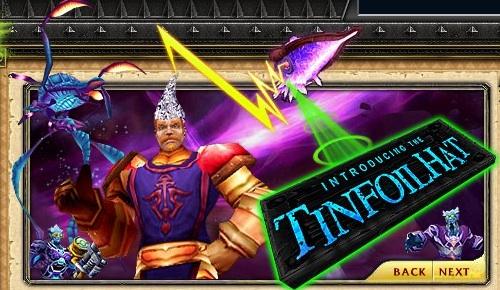 According to developers’ stories, it should conceal information about a person, who was wearing it, hide a gear level, make invisible at Armory, not show in “who”. There was the only disadvantage. The hero who was wearing that hat could achieve a high level of clarity in mind due to the special material and magic characteristics of the hat, it gave him an opportunity to see thin connections between different events. But verity, extracted as a result of the clarity, couldn’t be kept in you from others.

Year 2008 satisfied the musicians of WoW. Blizzard promised to introduce a new class who would defeat everybody with its music, punish cursed villains with power of rock, block ears with an electric guitar and tear to the smallest pieces from inside. The idea of this unusual game is to press the notes.

In 2009 Blizzard announced that mount could be tricked out. You want to fix a slugthrower to tiger’s head or add a turbine under his tail – you could do whatever you want. The company wanted to do a battle from a team dance, where the skills of arena would be useful too.

The 2010th year was delighted with useful adding, it was named Calibrometry dignity, which had to replace GearScore. Everybody suddenly turned into Tuskkars instead of gnomes, elfs, orcs and other with trained fishing profession. Battle.net decided to promote their system and declared about opening of a dating service, which of course hadn’t opened.

The 2011th year. The developers announced that hardcore underground, on Deep Dark slider created, was introduced, where was supposed to be very-very dark. It was so dark that you should move with a help of touch. Also they decided that it would be better to teach beginners and presented everybody a supporter Crab, who gave advices about armor and bosses. “Crab for crabs" as it was called later. People liked him so much that it came back in 2013.

In 2014 the announcement of a new game appeared, with new fighting level named as Blizzard Outcasts: Vengeance of the Vanquished. And a visual level should be high, legendary heroes from well-know games, abilities, levels, things – everything that s player of Blizzard's words is acguinted with. And the list of updatings for Wow was posted too. Where you could find for example:
- "The pattern of usage an ability “Death Grip” will be dependent on his size. If a target which Death Grip tries to pull toward is larger than he is, then Death Gripp will be put toward to the target, not vice verse. The discount for race change is proposed for gnomes Death Grip."
- "To make the game for Mages even more pleasant, persons who use such words as “tray”,“table”, “food”, “drink”, “snack”, “mage” or “pls” in raid chat, battleground, General or Trade channels, also with a help of function ‘Say’ or ‘Yell ’ within a Mage’s hearing are killed immediately."
- "The ability “Charge” became a passive effect."
- "Wrathion will again embark players on an expansion long quest, rewarding them with Legendary item as s result. Firstly, players with Anduin will depart to Daenor, where they should stay with a prince through his formative years. The player should explain the prince how to talk with girls, how to tie a tie and other practical things. The process will take on average about 5 years, but it can extend for long years depending on how much Anduin hates you. After you should enter brightly into Arenas and attain rating 2200 or higher. Then Wrathion will ask 100 level players to collect 60 small knickknacks in raids of normal level. He was always interested in them. After you will be sent back to Azeroth to defeat every Battle Pet trainer – you have been training for this, haven’t you? Then you will need to collect 3000 Valor; maybe, Valor will have been canceled at that moment, so good luck. When you finish with it, you should only defeat every raid boss in the expansion 12 times (nor more than one per week). So you will prove that you are worth a new legendary T-shirt and the Achievement “I had risked my life for Wrathion but he gave me this dull T-shirt”."
Not so many can be satisfied with this updating, but the joke turned up to be a funny one, because it was done as a usual one. There wasn't any bright event from Blizzard in 2015. Let’s see what they will dare to do today. Finally, I give you a hint, that we have pranks for you today. Don't be late to visit us and find it out. May the Force be with you!